It’s an astonishing fact: physicians of Indian heritage care for approximately one of seven patients in the U.S. And their collective impact continues to rise.

Since its founding, the Central Flor ida  Association  of  Physicians  from  the Indian  Subcontinent  (CAPI)  has  grown to  more  than  600  members  representing  India,  Pakistan,  Bangladesh  and  Sri Lanka. Based in Orlando, the non-profit professional  association  serves  the  needs of medical professionals practicing in Orange,  Osceola,  Volusia,  Seminole,  Lake and Marion counties.

CAPI, which has grown into one of the largest ethnic healthcare organizations in Florida, is a subchapter of the national organization American Association of Physicians of Indian origin (AAPI), which represents the interests of more than 80,000 physicians.

In the early 1980s, with the mission of uniting medical and dental professionals of Indian heritage in Central Florida, while also pooling resources to make a proactive difference, a local association was formed.

Orlando has the distinction of being the only city in the U.S. to host the National AAPI Convention four times in 1989, 2002, 2009 and 2015. Locally, CAPI has initiated extensive community programs from its early days, including multiple health camps and fairs each year and outreach programs to nursing homes and schools. Its COAC program to battle childhood obesity continues to be a run away success.

The generous philanthropic align ment with the University of Central Florida, Florida Hospital, and Orlando Health is a matter of immense pride for CAPI.

CAPI has spawned a number of physician leaders in their professional and community organizations. Add to this: care given at each point of professional contact with patients seeking healthcare delivery, and the picture of service is wide and deep.

Recently, the 33rd AAPI national convention in Orlando attracted more than 1,800 attendees, with a budget of more than $1.8 million, said Amish M. Parikh,MD, Chair of the AAPI Convention 2015 and a cardiologist with Premier Cardiology & Vascular Association. Dr. Parikh also chairs India Day with the Orlando Magic, and serves as regional director for AAPI (South).

The AAPI national convention gave Orlando’s economy an impressive boost in June 2015. Keynote speakers included U.S. Surgeon General Vivek Murthy and 2014 Nobel Peace Prize Laureate Kailash Satyarthi. At 37, Murthy, an internal medicine doctor from Miami, made history as the youngest appointed U.S. Surgeon General and the first Indian. AAPI and CAPI strongly supported his candidacy. Satyarthi, an electrical engineer by training, and youth activist who founded Save the Childhood Movement and Global March against Child Labour, is the seventh Indian presented the prestigious international award. The galaxy of superstars included the icon of the Art of Living and Yoga and TM – Sri Sr Ravi Shankar, and the renowned Attorney General of Southern New York/Wall Street, Mr.Preet Bharara, Esq. Others included Chairman of the American Medical Association, President of the Florida Medical Association, and dignitaries from India.

"The AAPI Annual Convention was regarded as one of the best Conventions in recent memory by many attendees that traveled from all over the USA, Canada and India," said Dr. Parikh. "Along with my Convention Co-chair Dr. Nikita Shah, DOO Dr Beena Parikh, and over 100 physicians and volunteers we worked tirelessly to organize a great combination of state-of-the-art CME seminars, inspirational speakers and world-class Bollywood entertainment."  CAPI’s regional outreach has expanded as troublesome health trends have emerged in Central Florida. For example, after noticing the alarming rise of obesity in children, CAPI organized several childhood obesity awareness programs for middle school students. CAPI has also collaborated on these special projects with the Boy Scouts of America, AGFT and the Orlando Magic. CAPI also organizes a Spring and Winter Gala, regularly attended by more than 300 members to facilitate discussion and networking opportunities. The Winter Gala will be held Dec. 3 at the Rosen Center. Please visit www.capimed.com to participate.

Other landmark community out reach projects:

CAPI Membership is open to all Central Florida physicians and dentists from the Indian sub-continent in good professional standing, regardless of country of origin or ethnic background. 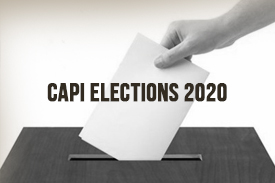